Home / The Benefits of Upgrading a Gas Turbine to EPA Filtration

The Benefits of Upgrading a Gas Turbine to EPA Filtration

The compressor of a gas turbine consumes a significant amount of energy during operation. Consequently, the efficiency of the compressor is very important to maintain optimum performance and has a huge impact on the machine thermal efficiency, power output and its long-term component health.

Engine performance and component life should be considered as a function of the total mass of contaminant ingested which is directly influenced by the type of atmospheric and industrial environment; these deposits decrease the airflow performance of the inlet compressor due to degradation in blade shape and surface finish. Ultimately the overall performance of the gas turbine is greatly affected.

For many years OEM guidelines and standards on air filtration were not particularly stringent. This has resulted in high quantities of dust, aerosols and water continuing to pass through the filters and resulting in reduced compressor efficiency.

The Importance of Filtration

The resistance of an air filter device or system has long been recognised to influence the gas turbine power output and heat rate through increased differential pressure. It is generally accepted that high inlet resistance forces the gas generator to do more work as it compensates for inadequate airflow.

It is also recognised but difficult to quantify, that the ingestion of sub 5 micron (μm) particulates, which impinge on the LP compressor blades, cause a ‘fouling’ phenomena which in turn further deteriorates the engine efficiency. To elaborate on what is not readily quantifiable; it is a direct relationship between the type of environment, levels of contamination, particle size/distribution in relation to the degree of fouling and consequential loss of efficiency in real life situations.

What has become apparent to some machine users who have increased the efficiency of their air intake filter systems is that a higher system resistance has had little negative impact. More importantly, the consistent cleanliness of the compressor has reflected in a significant improvement in all round performance of the gas turbine. In other words, compressor fouling appears to be more influential in the health, life and economics of the engine than inlet resistance.

EPA class filters remove sub-micron sized particles and droplets using proven techniques of particle attraction and diffusion. A major component of this technique is the air speed past the fibres and the diameter of those fibres.  This means that a lower air-stream velocity will result in improved particle removal efficiency. Optimum filter media areas are determined by testing and it is recognised that pleat shape and size contribute greatly to the overall performance of the filter.

Fundamental to filter selection is the recognition that all filter stages upstream of the final filter are employed as pre-filters to maximize the final ‘fine’ filter life and suitable weather protection is provided to limit the ingestion of rain, fog, ice, and snow.

EPA filtration provides particle removal efficiencies of up to 1,000 times greater at the critical sub-micron sizes than achieved by traditional reverse pulse and static filter systems (traditionally supplied by most gas turbine OEM’s).

The primary technical benefits derived from EPA filtration technology include:

The potential commercial benefits include: 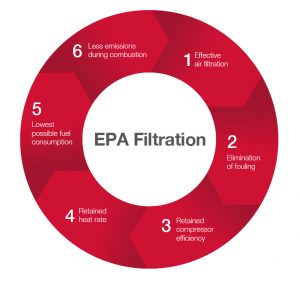 Feedback from operators that have added EPA filtration highlight that the cleaner combustion air has prevented deterioration in performance of gas turbines by avoiding compressor fouling, resulting in the engine thermal efficiency remaining stable.

Experience has proved that whilst EPA filters have a higher capital investment cost, the benefits are huge in comparison. Increasing plant revenue streams and ensuing a greater production yield can potentially reduce the filter system payback time to a matter of days. Overall reduction of operational expenditure, increasing gas turbine reliability and reducing downtime also play a significant role in the evaluation process.

Implementing EPA filtration into a gas turbine air intake system can play a huge role in increasing performance levels. Especially when you compare the results with traditional or lower levels of filtration found on most new gas turbine installations. The diagrams below highlight the key filtration efficiency differences, what that means in terms of particle penetration, and how cleaner intake air starts a chain reduction of benefits that result in a much lower cost of ownership.

The need to reassess your offshore GT filtration system

Understanding the impact of moisture on gas turbine filters